We’re the Fraser Family.  We currently live in northern Minnesota.  We’ve been involved in full-time ministry in Native North America since 1993.  We’ve had the privilege of meeting, working with, and alongside First Nations people in Canada and the US – sharing the Good News of Jesus Christ, and encouraging each other in our walk with Him.  It’s our desire that many will come to know Him as their Savior and grow strong in Him. 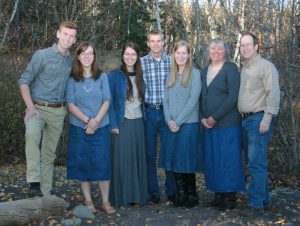 Serving the Lord together has been a wonderful adventure.  We’ve seen God work in amazing ways.  He has also given us opportunities through music – Gospel Bluegrass – to sing and share as a family about the hope we have in Jesus Christ.

Our faith is rooted in God’s sure Word.  Here are some Scripture verses that are foundational to our faith in the Lord Jesus Christ:

In the beginning God created the heavens and the earth.  Genesis 1:1 (NKJV)

Therefore, just as through one man sin entered the world, and death through sin, and thus death spread to all men, because all sinned–  Romans 5:12 (NKJV)

Then I saw a great white throne and Him who sat on it, from whose face the earth and the heaven fled away. And there was found no place for them. And I saw the dead, small and great, standing before God, and books were opened. And another book was opened, which is the Book of Life. And the dead were judged according to their works, by the things which were written in the books. The sea gave up the dead who were in it, and Death and Hades delivered up the dead who were in them. And they were judged, each one according to his works. Then Death and Hades were cast into the lake of fire. This is the second death. And anyone not found written in the Book of Life was cast into the lake of fire.  Revelation 20:11-15 (NKJV)

But now the righteousness of God apart from the law is revealed, being witnessed by the Law and the Prophets, even the righteousness of God, through faith in Jesus Christ, to all and on all who believe. For there is no difference; for all have sinned and fall short of the glory of God, being justified freely by His grace through the redemption that is in Christ Jesus, whom God set forth as a propitiation by His blood, through faith, to demonstrate His righteousness, because in His forbearance God had passed over the sins that were previously committed, to demonstrate at the present time His righteousness, that He might be just and the justifier of the one who has faith in Jesus. Romans 3:21-26 (NKJV)

But God demonstrates His own love toward us, in that while we were still sinners, Christ died for us.  Romans 5:8 (NKJV)

For the wages of sin is death, but the gift of God is eternal life in Christ Jesus our Lord. Romans 6:23 (NKJV)

Moreover, brethren, I declare to you the gospel which I preached to you, which also you received and in which you stand, by which also you are saved, if you hold fast that word which I preached to you–unless you believed in vain. For I delivered to you first of all that which I also received: that Christ died for our sins according to the Scriptures, that he was buried, and that He was buried, and that He rose again the third day according to the Scriptures, 1 Corinthians 15:1-4 (NKJV)

Jesus answered and said to him, “Most assuredly, I say to you, unless one is born again, he cannot see the kingdom of God.”  John 3:3 (NKJV)

“For God so loved the world that He gave His only begotten Son, that whoever believes in Him should not perish but have everlasting life. “For God did not send His Son into the world to condemn the world, but that the world through Him might be saved. “He who believes in Him is not condemned; but he who does not believe is condemned already, because he has not believed in the name of the only begotten Son of God. John 3:16-18 (NKJV)

“He who believes in the Son has everlasting life; and he who does not believe the Son shall not see life, but the wrath of God abides on him.” John 3:36 (NKJV)

For by grace you have been saved through faith, and that not of yourselves; it is the gift of God, not of works, lest anyone should boast. For we are His workmanship, created in Christ Jesus for good works, which God prepared beforehand that we should walk in them.  Ephesians 2:8-10 (NKJV)

For the grace of God that brings salvation has appeared to all men, teaching us that, denying ungodliness and worldly lusts, we should live soberly, righteously, and godly in the present age, looking for the blessed hope and glorious appearing of our great God and Savior Jesus Christ, who gave Himself for us, that He might redeem us from every lawless deed and purify for Himself His own special people, zealous for good works. Titus 2:11-14 (NKJV)

Let your light so shine before men, that they may see your good works, and glorify your Father which is in heaven.  Matthew 5:16 (NKJV)

For you were once darkness, but now you are light in the Lord. Walk as children of light (for the fruit of the Spirit is in all goodness, righteousness, and truth), finding out what is acceptable to the Lord.  Ephesians 5:8-10 (NKJV)

And Jesus came and spoke to them, saying, “All authority has been given to Me in heaven and on earth. “Go therefore and make disciples of all the nations, baptizing them in the name of the Father and of the Son and of the Holy Spirit, “teaching them to observe all things that I have commanded you; and lo, I am with you always, even to the end of the age.” Amen.  Matthew 28:18-20 (NKJV)

Our God is amazing.  We deserve judgment, but He has shown us mercy.  Because of His love and grace toward us, we want to live for Him.  Yes, we often fall short… but He picks us up, forgives us, and leads us on.  He’s so worth following.  If you haven’t yet, we hope you will put your trust in Jesus Christ… and follow Him too.  He’s the only way that any of us can be right with God and escape the judgment that we all deserve.  “And salvation is in none other, for neither is there another name under heaven which is given among men by which we must be saved.”  Acts 4:12