I’m starting this post off with an apology for not doing a better job with keeping our blog up to date. Some of you may be waiting to see the last part of our trip…and while we don’t have quite as many pictures from our second weekend in Oklahoma, here’s a little taste of it.

So a quick retracing of our footsteps so far…the first weekend of our trip was in the area of Ada, Oklahoma, where we sang a couple times at Blue Baptist Church; the next week was spent in San Antonio, Texas, where Dad did some recording for The Storyteller and our van was stolen and, miraculously, found (go back and read the story if you haven’t already!); that weekend we drove back to Oklahoma, which brings us to this part of the story.

Tahlequah, Oklahoma. We arrived on Friday at our friends the French’s house, where we would be staying for the next week. 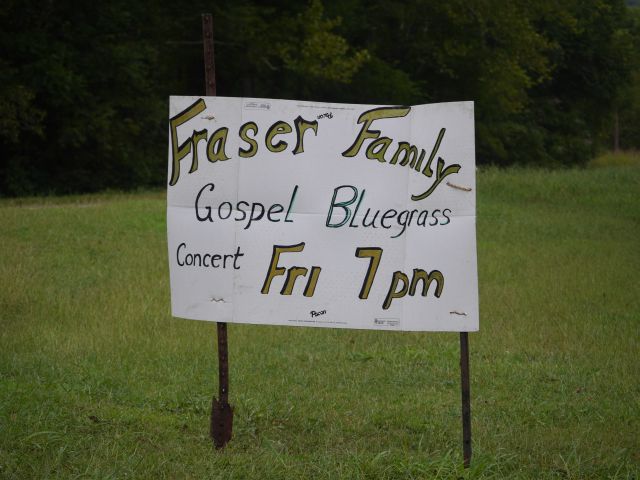 Here you are supposed to imagine pictures of our concert.

Sometimes afterward we let any children who want to come up and play the instruments. It’s fun watching some of them, many of whom have never played anything like a banjo before. (Actually, it’s also fun for the adults who can’t help themselves either.) 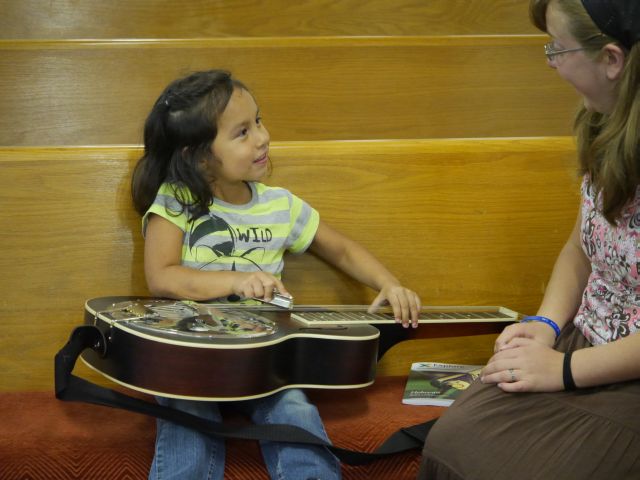 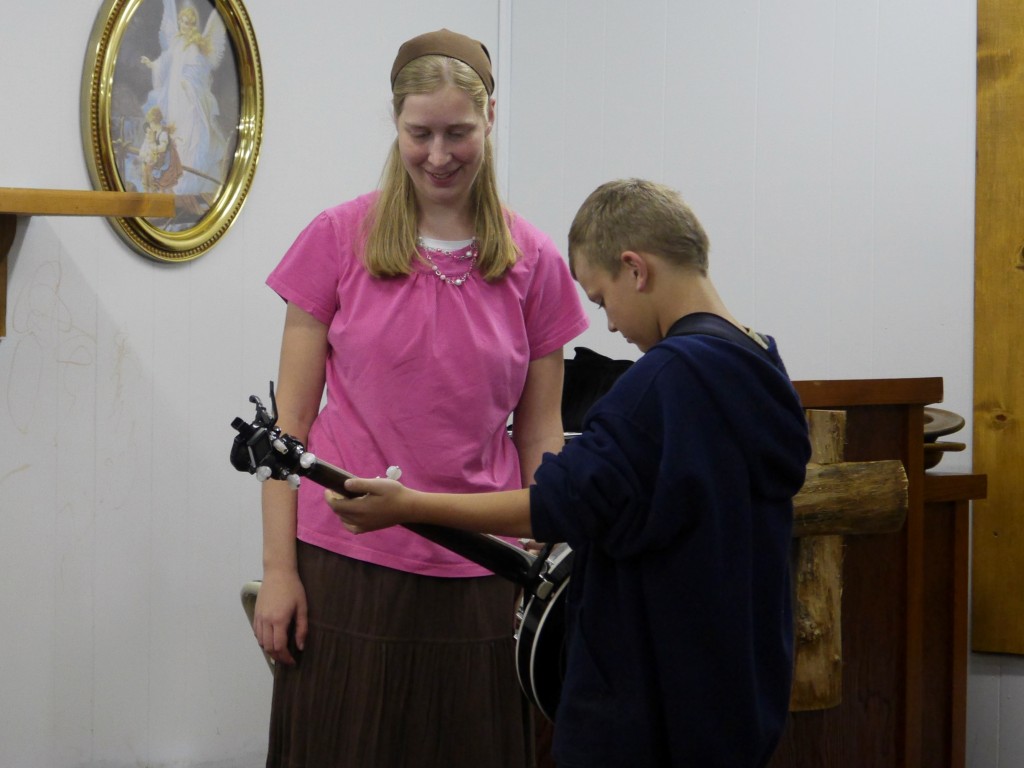 The church was holding a revival, which Dad preached for and we sang. It was nice to meet other brothers and sisters in Christ and to see some again whom we had met last year at the camp in South Dakota. 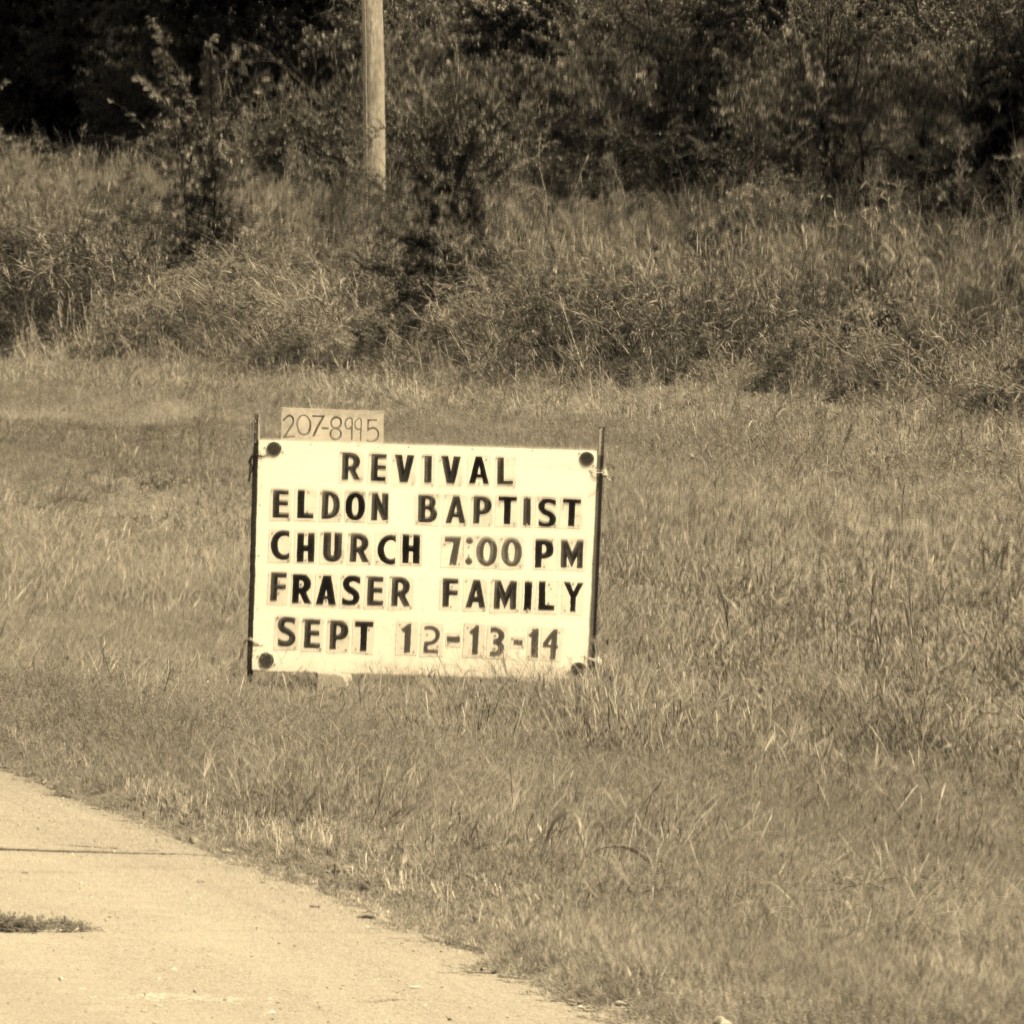 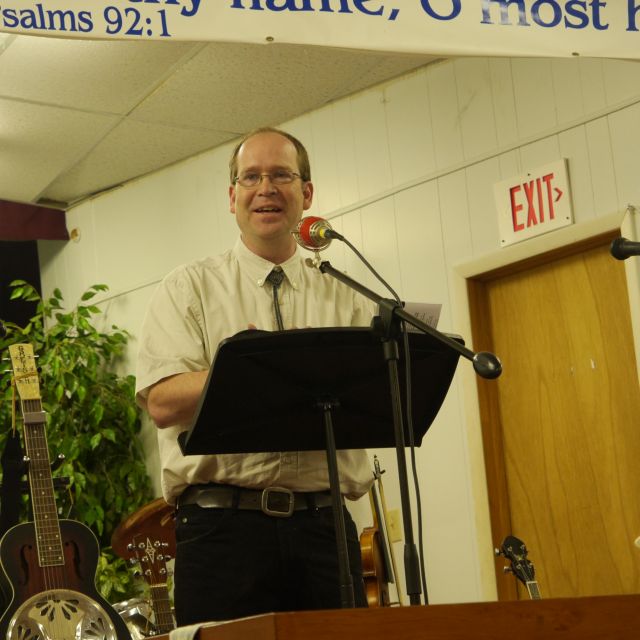 Revival…we like to think of that as something that sweeps across a church, or multiple churches, or a nation…and God can do that. But what about ourselves? Revival begins with individuals who are humble and broken before their Creator. If you are praying for revival, remember the words of Isaiah 57:15– “For thus says the High and Lofty One who inhabits eternity, whose name is Holy: ‘I dwell in the high and holy place, with him who has a contrite and humble spirit, to revive the spirit of the humble, and to revive the heart of the contrite ones.'”

After the revival was over, we settled in a little more at the French’s house. It would be a few more days before we left because there were some testimonies for Dad to record, and he had to drive back to San Antonio to get our van!

Dad always enjoys meeting Native believers and recording their testimonies. In Tahlequah he was able to record three men who are following Jesus Christ. 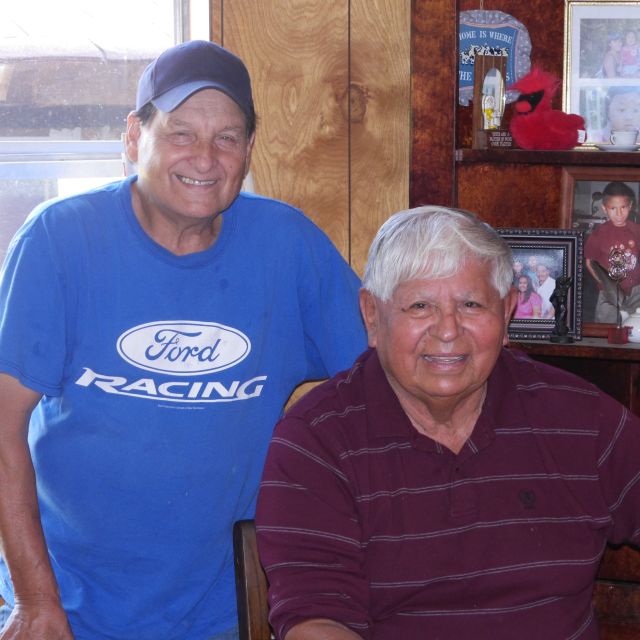 Mr. Holcomb (right) and Mr. French (left), who led him to the Lord

Mr. and Mrs. French were so hospitable, making us tasty meals and providing us beds, fellowship, and many laughs! Some of our family especially enjoyed the two-wheeled vehicles… 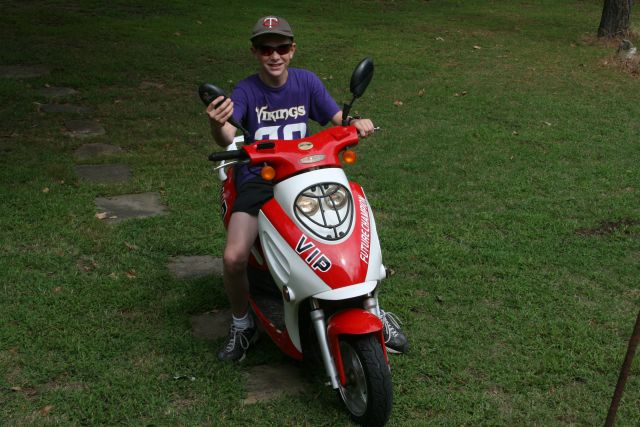 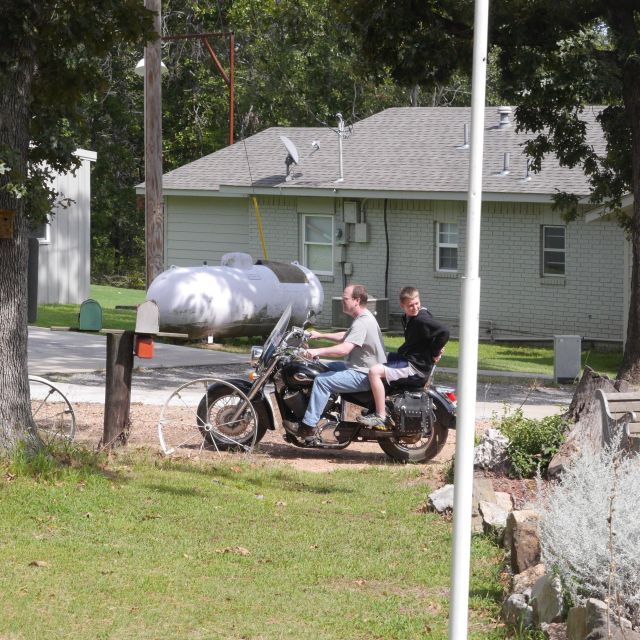 Some of us girls enjoyed being enthusiastically given rides, and Abby and the boys had too much fun on the moped.

On Monday, Dad and Daniel drove down to San Antonio to get our van back from the shop it was being fixed at. That was a long two days of driving round trip! The night they were down there Dad made use of the opportunity to do some more recording for The Storyteller.

Jonathan was lonely for his brother, but found a job to keep him occupied for a while. 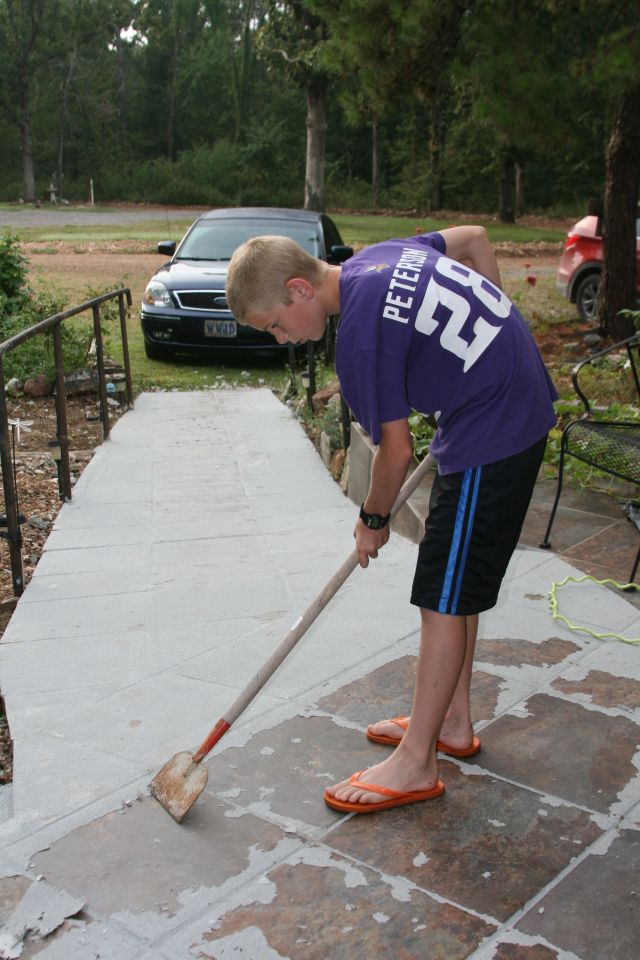 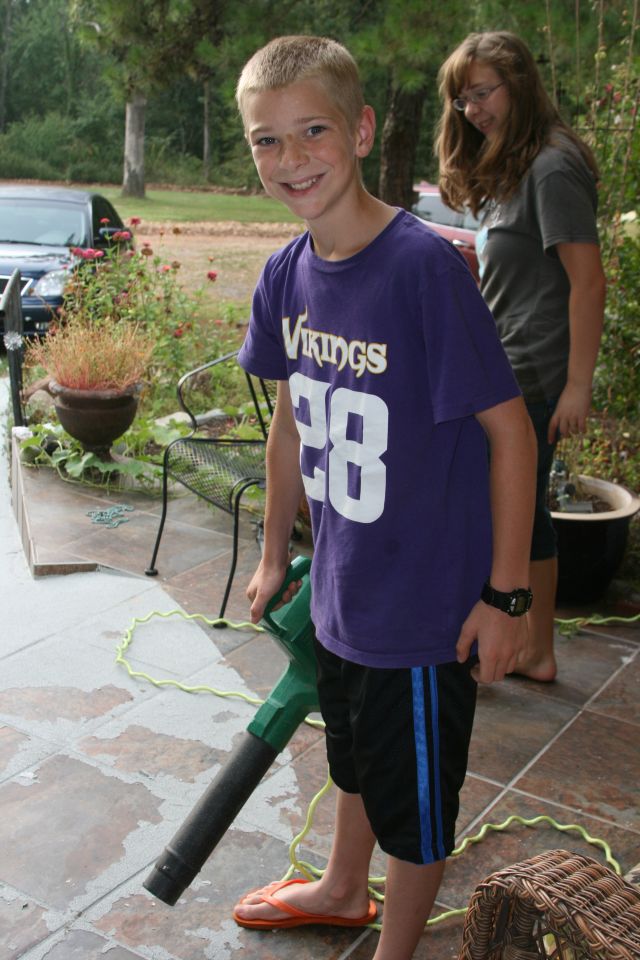 …and blowing it away (the fun part!)

The morning we left, Mrs. French made us homemade biscuits and gravy. And bacon. We had such a good time with them while we were there. Thank you, Mr. and Mrs. French! 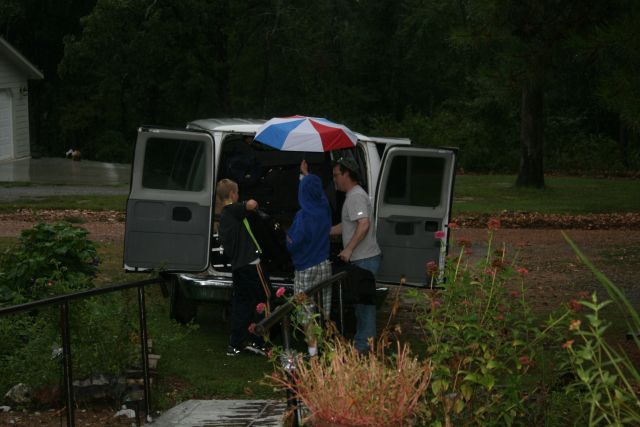 We drove to Missouri to spend the night with our good friends the Fesslers, who not only put us up but made a feast for dinner and breakfast. It was so good to see them again. (We love you!)

Upon arriving home we were greeted by something we were expecting but at a larger degree than we had imagined. A broken window. And glass. Everywhere. 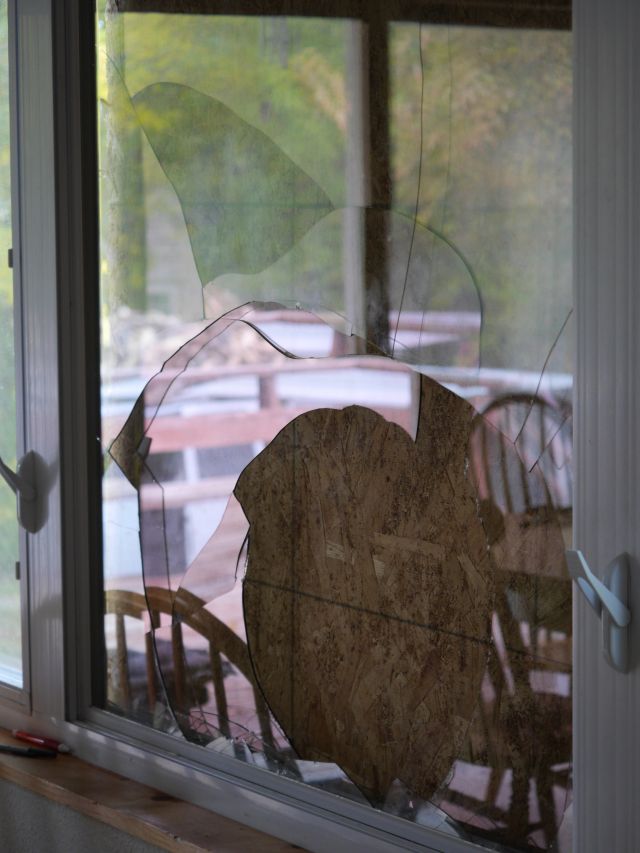 Our neighbor who was watching the house for us saw that our window had, as you can see, a hole it in. We called our friend and co-laborer Tom and he came and boarded up the window for us. In the process he saw the culprit: a dead grouse under our dining room table. Thankfully our neighbor came and took care of that for us! 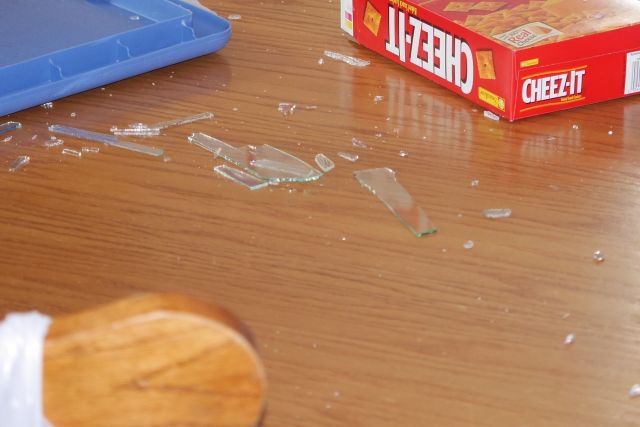 We are so thankful God allowed it to happen while we were gone! Glass was everywhere, and had gone farther into the house than we would have expected. It took a while to get it all cleaned up. 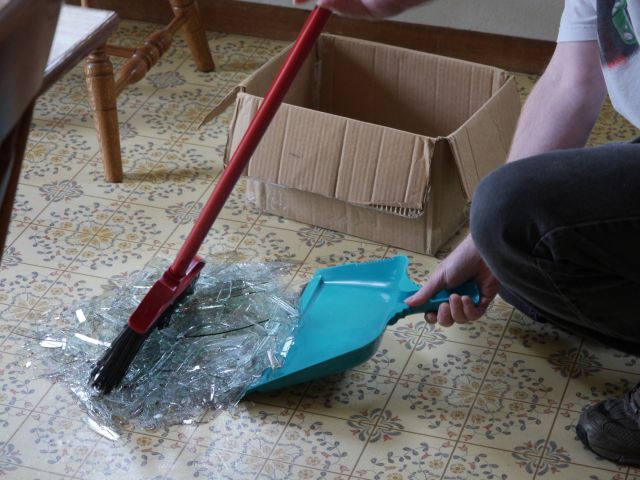 We can so clearly see God’s hand in various ways on this trip. Thank you for all your prayers and for everyone who was a part of this story, both on the road and here at home.

Now we are wishing you a (late) Merry Christmas…because of Christ!

Who is like the LORD our God, who dwells on high, who humbles Himself to behold the things that are in the heavens and in the earth? Psalm 113:5-6